I have dreamt about having a farm for as long as I remember. Waaaaaaay back when I was too naive to understand the responsibility of having a farm, and when I thought that farming consisted of, well, playing with animals all day - ha!

Slowly I started getting things in order to make my dream come true. I reconnected with an old high school buddy and we started the blog "About An Acre" back in 2010. We had 24 chickens, two dairy goats (and counting), and a garden plot all on .... about an acre.

I was learning for the first time ever how to actually farm, what kind of work it involved, and animal husbandry. The 'about an acre' piece of land was about 30 minutes from where I lived, so I would drive out every morning and night and do farm chores. We tilled the garden area, cleared brush, put up fencing, and built a chicken coop. We dealt with coyotes, a case of 'sore mouth' (which is highly contractible by humans too, which I didn't know at the time, but never got it - THANK GOODNESS FOR GOOD IMMUNITY!), figured out a natural water source, and sold eggs. 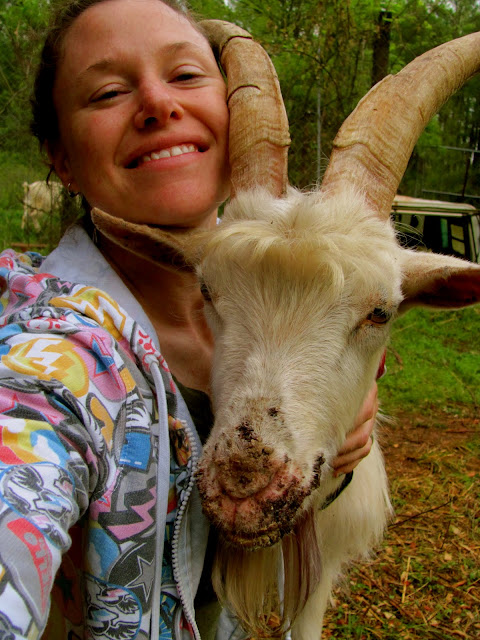 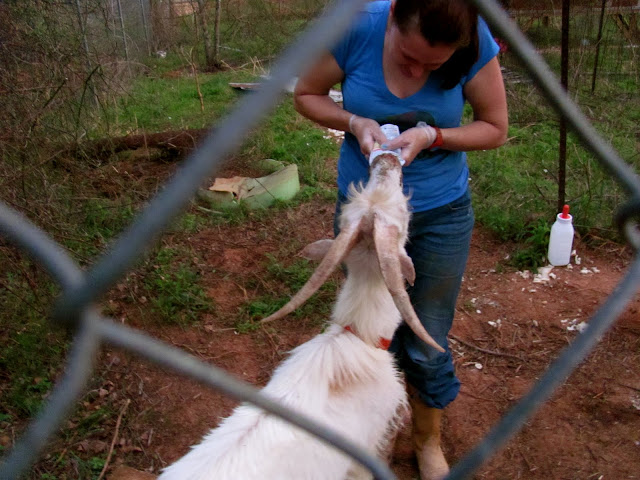 My friend wanted to expand into Boer goats (meat goats), turkeys, and more chickens. I was working full time and the driving was really taking it's toll on me, so I relocated to a farm closer to my house (yet still a 15 minute drive), and took the goats, which the two original goats had a kid, and I purchased a set of twins Saanen dairy goats that I was bottlefeeding, so five goats, and 15 chickens.  There were two sheep there that I took care of while I was there, I fenced in about 2.5 acres, got a few more chickens, built a new coop, set up my garden and the 'about an acre' turned into about THREE acres...
Right after I moved the animals to this new farm, one of the twins got infected with a parasite called the meningeal worm. It is a parasite that lives all of its cycles within the white-tailed deer, but if ingested by a goat, alpaca, or other ruminant, it gets lost and starts to bore holes in the spinal cord of the non-deer host. Well, my sweet little 12 week old Milly was infected and went down. I had the University vet school come out and help me with her, and they referred me to a 'goat guru' who suggested probiotics as well as other methods to save her, although she and the vet school said her chances were not good since she went down (her hind legs lost all strength), and that it would cost me a lot of money and time to save her, and they would put her down. She was just a baby still, and being a twin, was very close with her sister, so I was adamant about massage therapy, vitamin injections, electrolytes, probiotics, and LOTS & LOTS OF TIME. Needless to say, Milly had a slow recovery, and always had to wear shirts due to a neurological problem that remained because of the spinal cord injuries from the parasite. I had the vet come out and look her over, she was happy, not in any pain, and bounced around like a kid. She stayed a bit puny, and could never be bred, but she was such a shiny bright force at the farm and I was glad I was able to save her. I stayed at that farm for for three years and tended to it all by myself. It was such a nice place, but it wasn't MINE. I still had that burning desire to have MY FARM. The perfect place where I could sip my coffee on the porch while watching my animals frolic.... 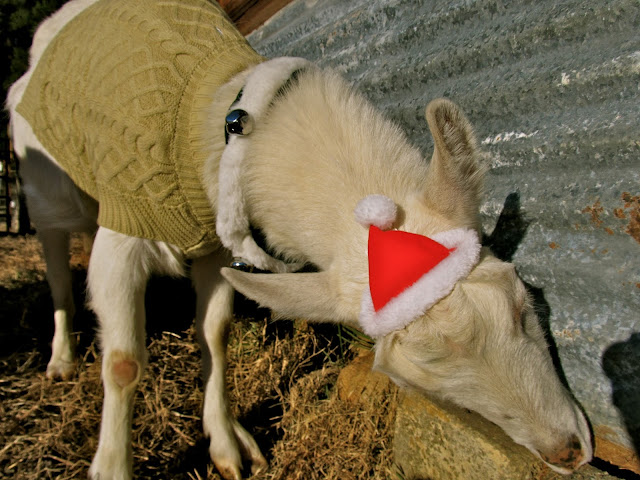 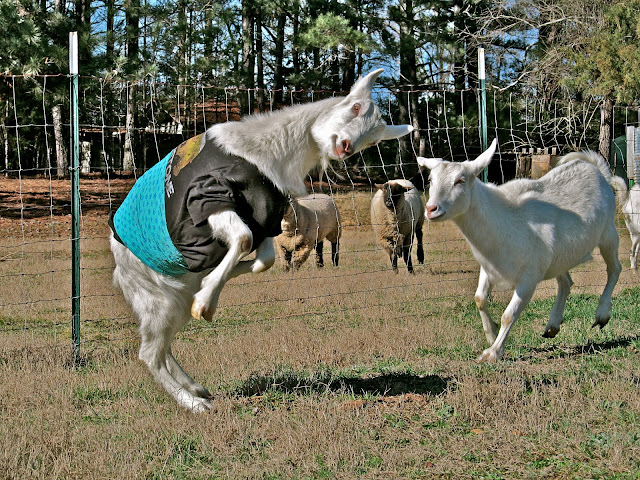 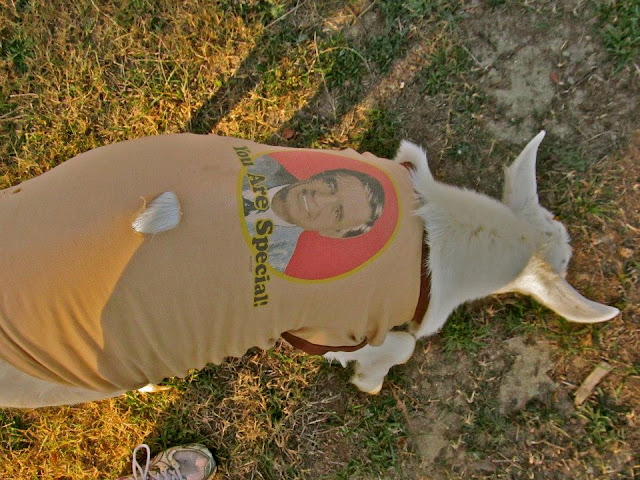 In 2014 I stumbled across a little piece of property WITH A CUTE HOUSE off a dirt road in Winterville, GA. I was actually making a run to the farm supply store and on my way back to the farm, just taking a scenic route, when I saw this beauty. I had Baby in the car with me, and the house was empty with a lock box, so we got out and walked around a bit. Absolutely stunning property, and Baby highly approved.

Long story short (and believe me, it is a LONG story), we purchased the house, and moved in at the end of May 2014. There was no fencing, no sheds for animals, chickens, etc., so I continued to have the animals at the other farm until I was able to fence and build sheds for the goats and a coop for the chickens. I was able to move the animals over on August 1, 2014 and everything was coming together PERFECTLY.

That winter, I started clearing out land - it was a jungle aside from the yard. I was getting my little garden area ready for the coming Spring and in the midst of this project, my dad passed away suddenly in a car wreck. My teenage sister was still in school, so I moved in to my dad's house, a few hours away to get her through the school year before she would then move in with another sister and start a new school.

I came back home in June 2015. Sweet Baby passed during this time as well, due to an inoperable brain tumor. My dad had a cat, horse, and elderly outside pasture dog that needed homes, so I found the cat a home with my mom and stepdad, and I took in the horse and dog.

The garden was overgrown and overrun with brambles again, and it was the middle of summer when the snakes are slithering, so it would be Winter before I could tackle that project again.

In September, I fenced a big pasture for the horse, Rose, we were in the process of housetraining the old dog, Eddie Ray, and things were falling back into place, when a boar started coming around..... 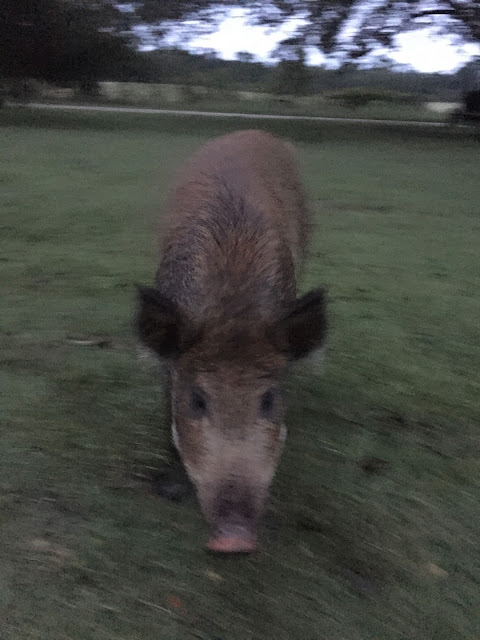 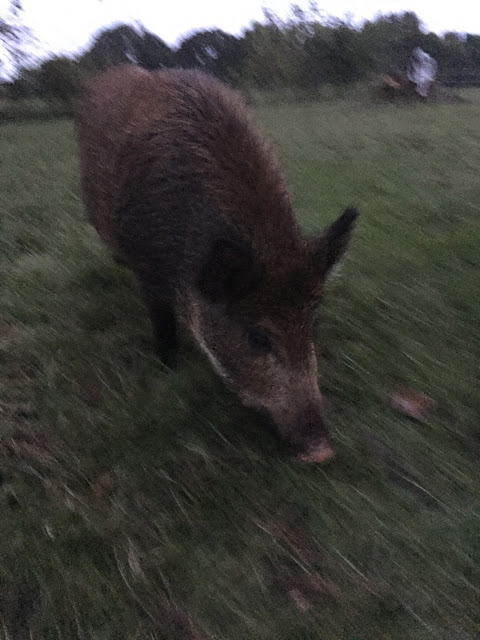 Being still somewhat naive about farmlife, and loving pretty much all creatures, I didn't see it as a threat at first. I had several people school me about these things though, and I researched where to shoot them if you encounter one for quickest kill. Apparently, aiming for the head is not the best because their skull is very strong and their brains very small - it would be easy to hit them in the head, but miss the brain and just make the boar very mad, which you don't want. My research said to aim behind the shoulder blades. This is where vital organs are and you are likely to puncture a lung or hit the heart.

About 24 hours went by and there was no sign of the boar. I was somewhat relieved, because I had never shot and killed anything. I have put down a sick chicken, but that was about it.

The next day, still no boar, but I came home from work for my lunch break and found my Milly seizing on the ground. It was bad. This was it, and I couldn't put her down myself. I thought about it and just couldn't do it. I called my friend, Holly, and she brought over a friend who was very knowledgeable about goats, and hoped that maybe Milly could be saved, but he had to put her down...

That evening my sweet mama came over to help me dig a hole on the back of the property. I had come inside to call Christian at work and ask him to stop by the supply store and grab a bag of lime (for the grave) on his way home from work. When I walked out the back door, I saw the boar!!! It was gnashing it's teeth at my mama! She was swinging the shovel it it, and it was NOT backing away. I ran back in the house and grabbed my pistol and then ran over to the area my mama and the boar was.... it started coming towards me, and I pointed the gun at it as if it would suddenly see and understand what was about to happen, and run away. It did not... I circled around to it's right side (all while running away from it) got a good aim where I wanted to hit it, and fired. I got it. I hit it on the first shot. It started making the most pitiful sound and getting up and falling down, and I was going to shoot it one more time to put it out of it's misery, and my gun jammed. 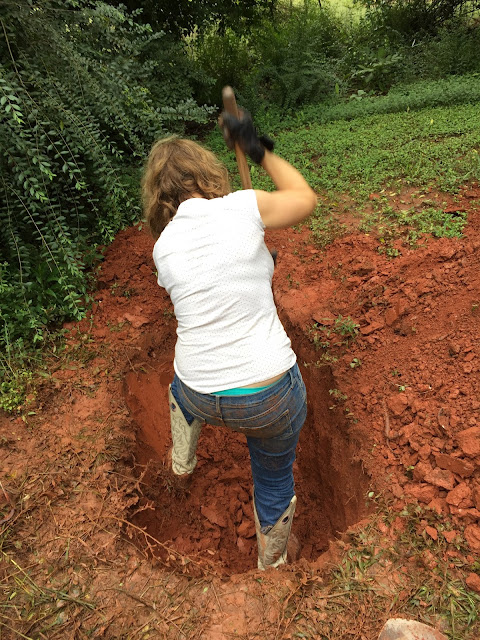 It suffered, and that bothered me, but it died. My stepdad, Shane, took it to the meat processor where it weighed in at 65 lbs. Polly the pig was made into sausage that my family enjoyed and is still enjoying. 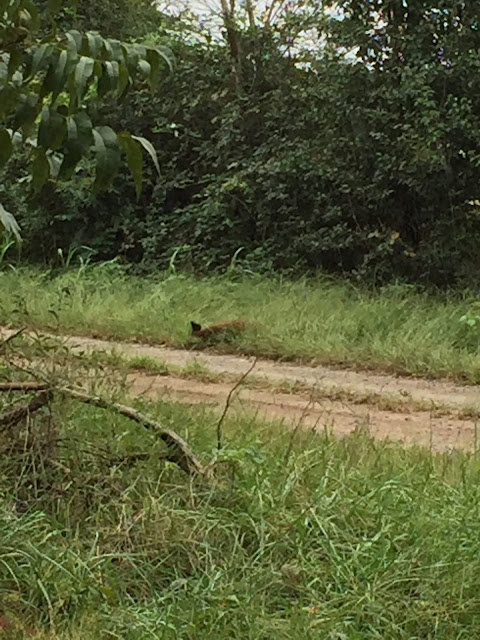 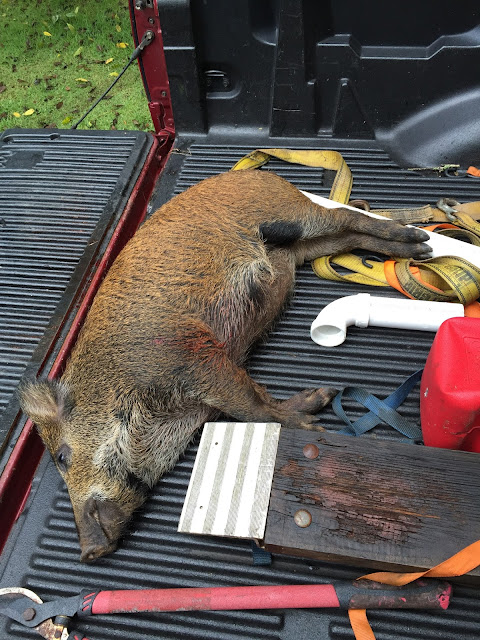 It was a very strange day indeed, and the most emotionally challenging day at he farm EVER. 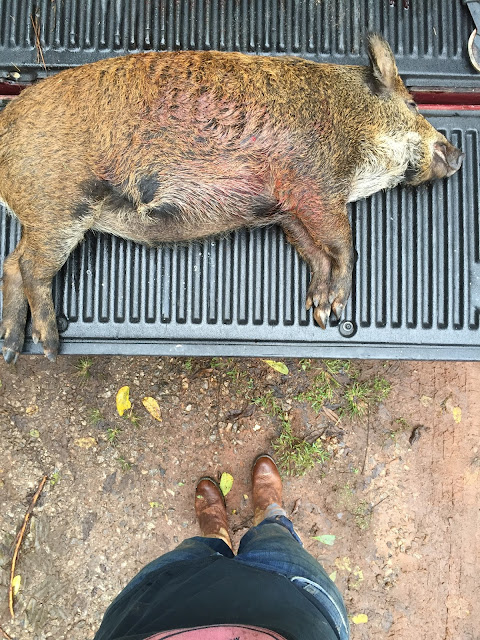 We got Milly buried, and then it was back to transitioning Eddie into being a house dog.... living with a mean cat. ;) 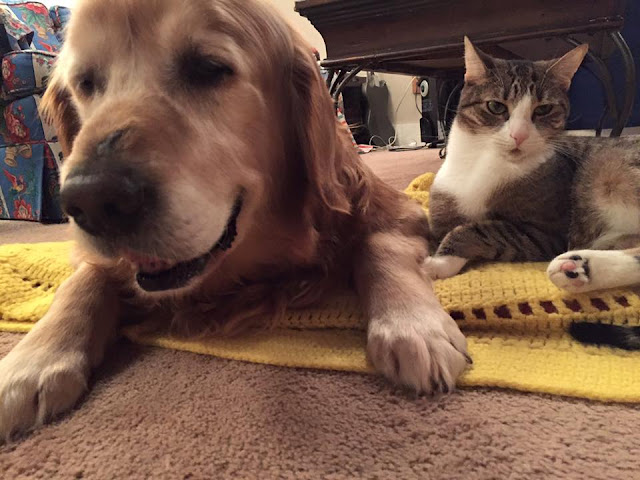 By October, Eddie was in the house, and Winter was coming early. I started clearing things out a little at a time, and by the end of December, I had expanded Rose's field, converted an old hog pen on the property to a shelter for Rose, and agreed to take in a foster horse to be her pasture mate (who will be arriving sometime in the Spring this year). 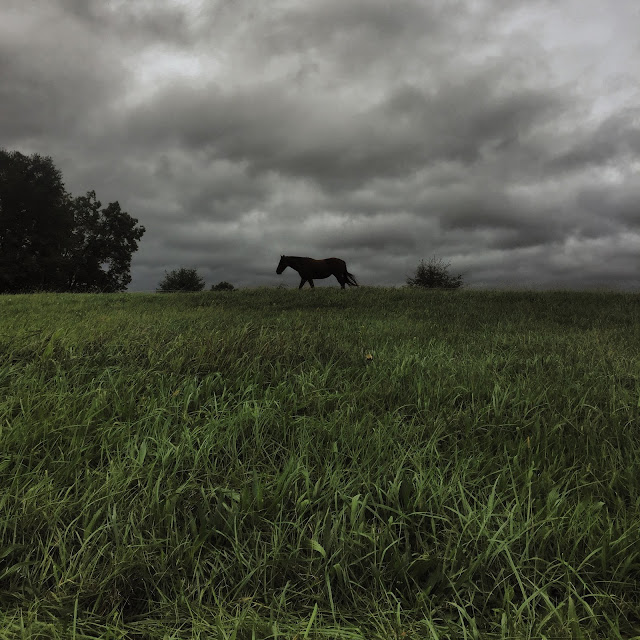 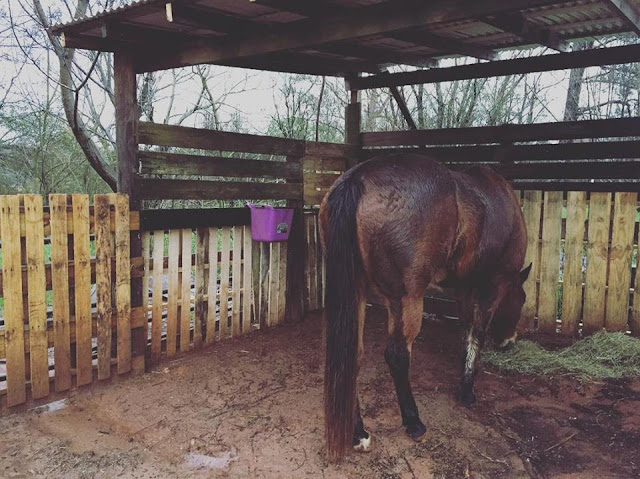 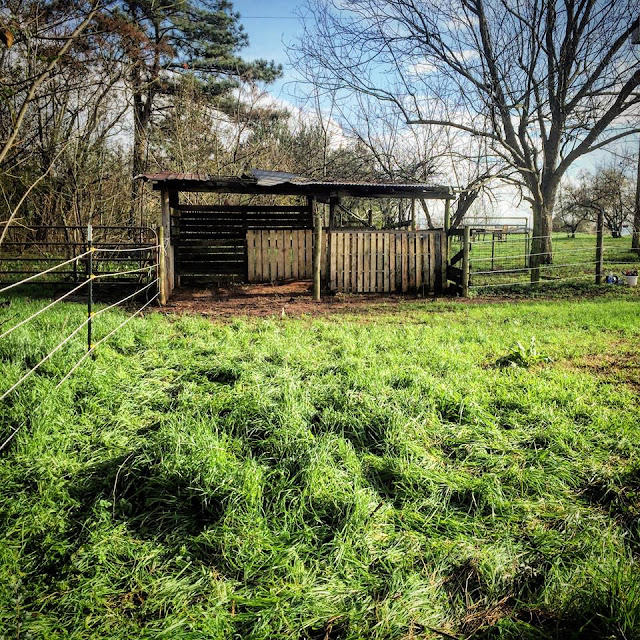 In January and February, I was back to clearing out the garden space again and by the end of February, it was ready for dirt! I have seeds germinating currently, so will hopefully have something to put in the ground soon! 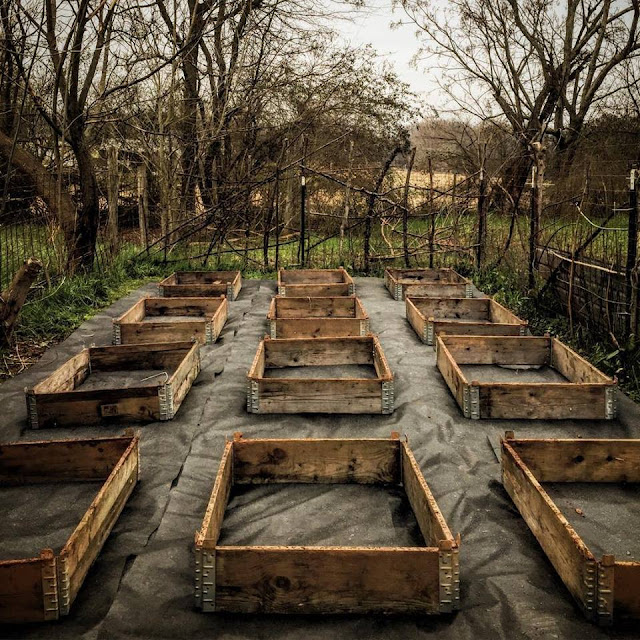 *Just a sidenote, Christian is not a 'farm boy', this is entirely MY project, my hobby farm, and I prefer it that way, just as he would never expect me to make music with him, I do not expect him to tend to the farm that is ALL my doings and MY dream, however he did take on full responsibility of everything at the farm last year when I was away unexpectedly for 6 months due to my dad's death*.